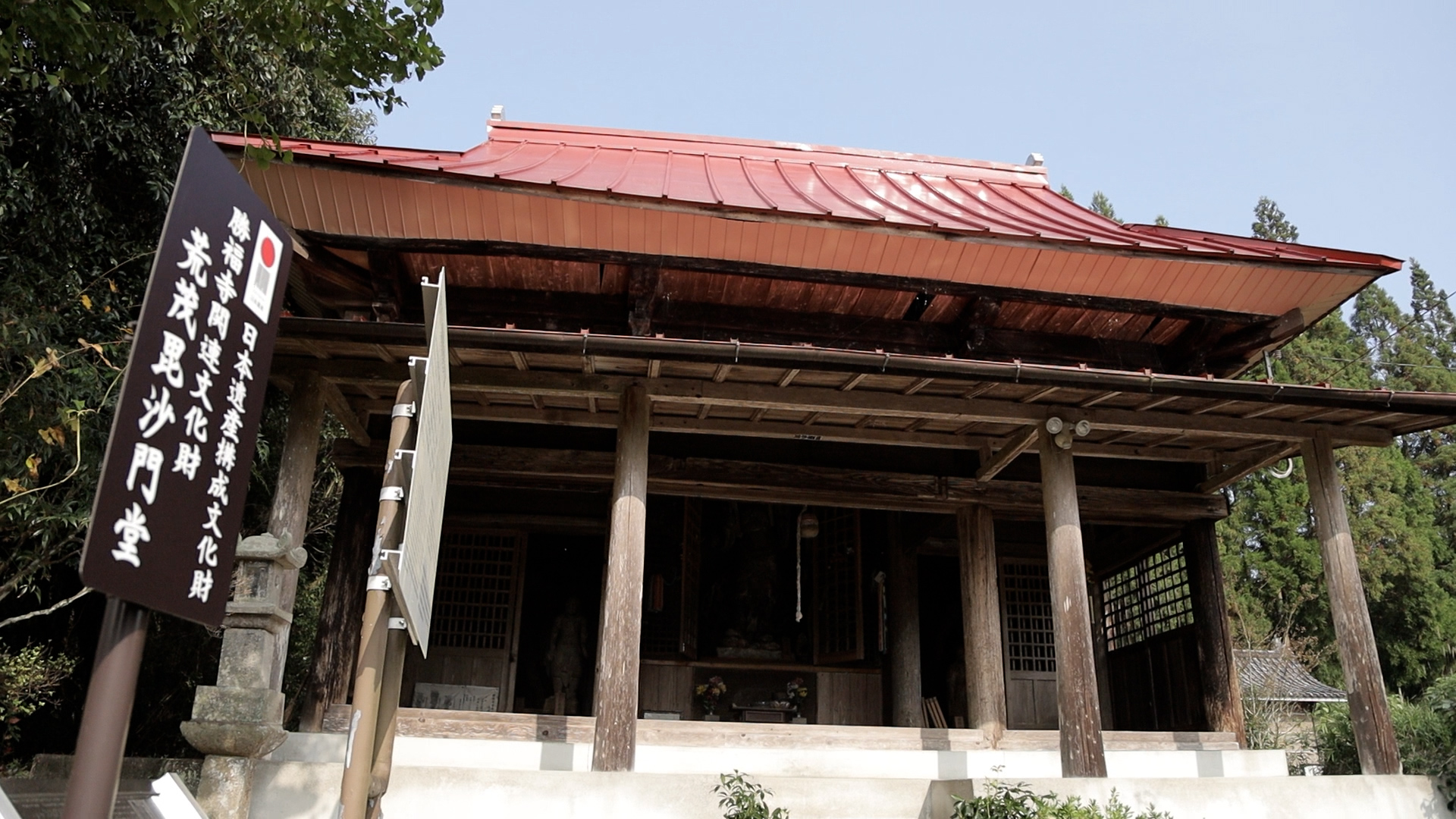 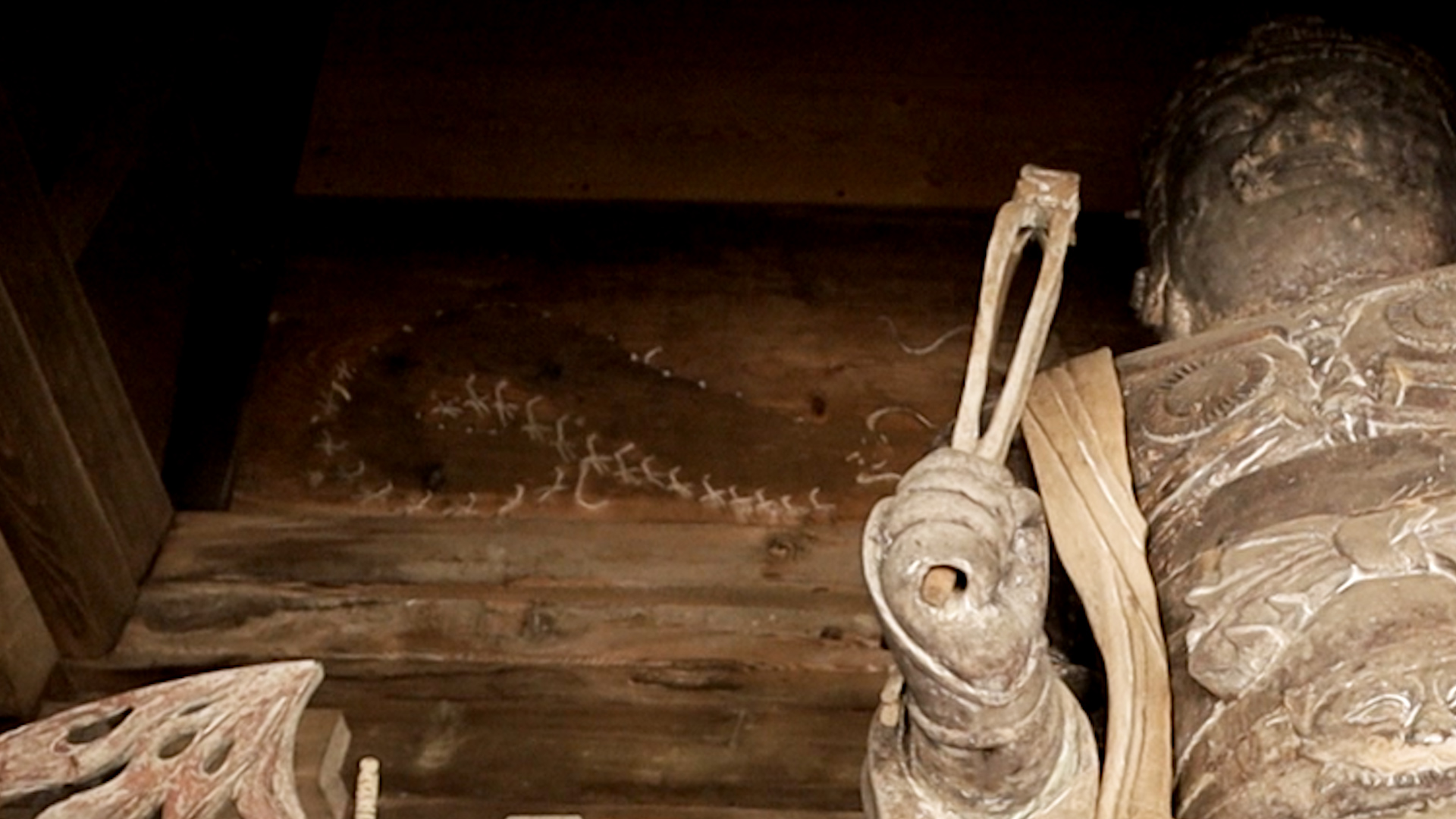 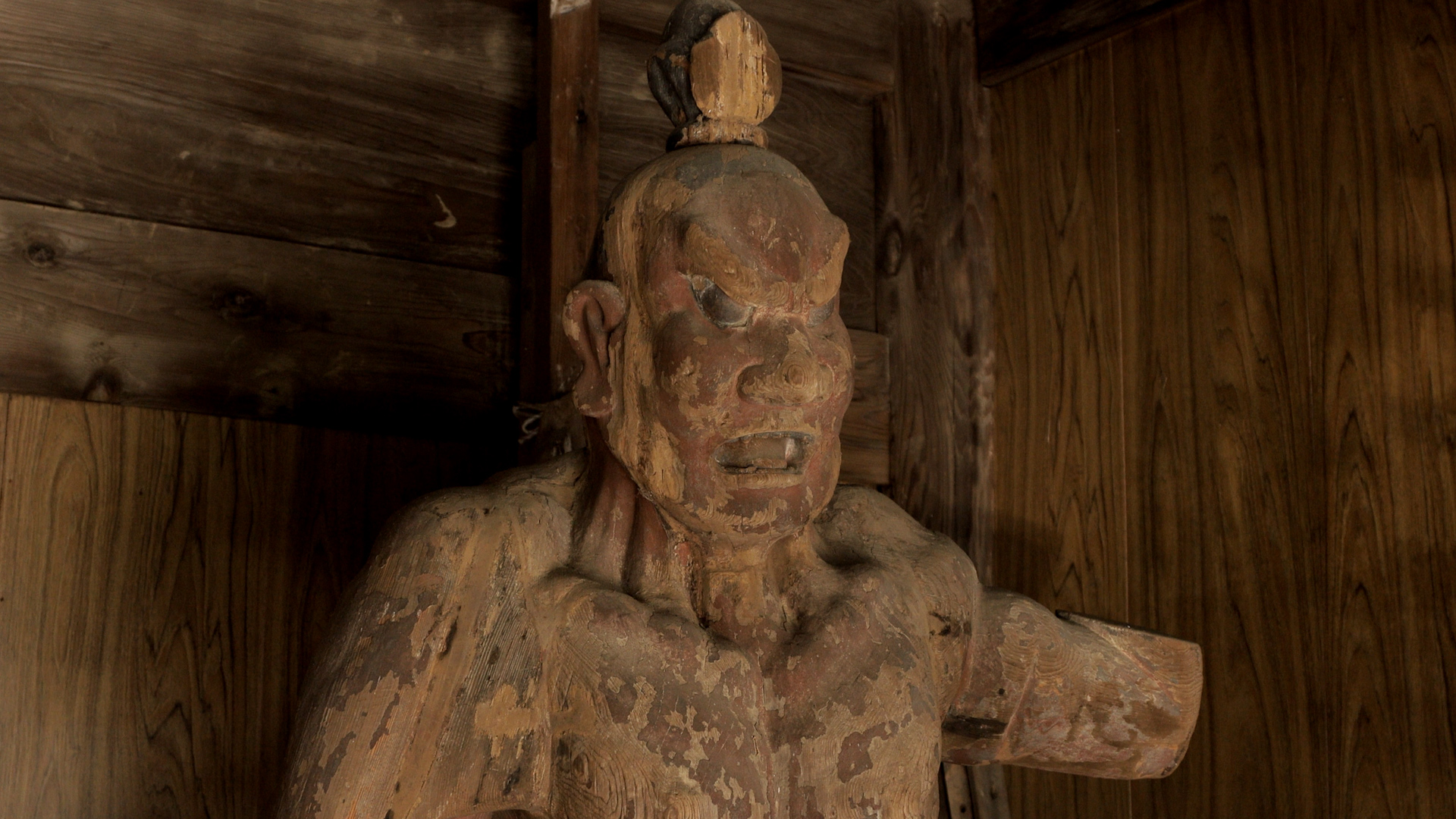 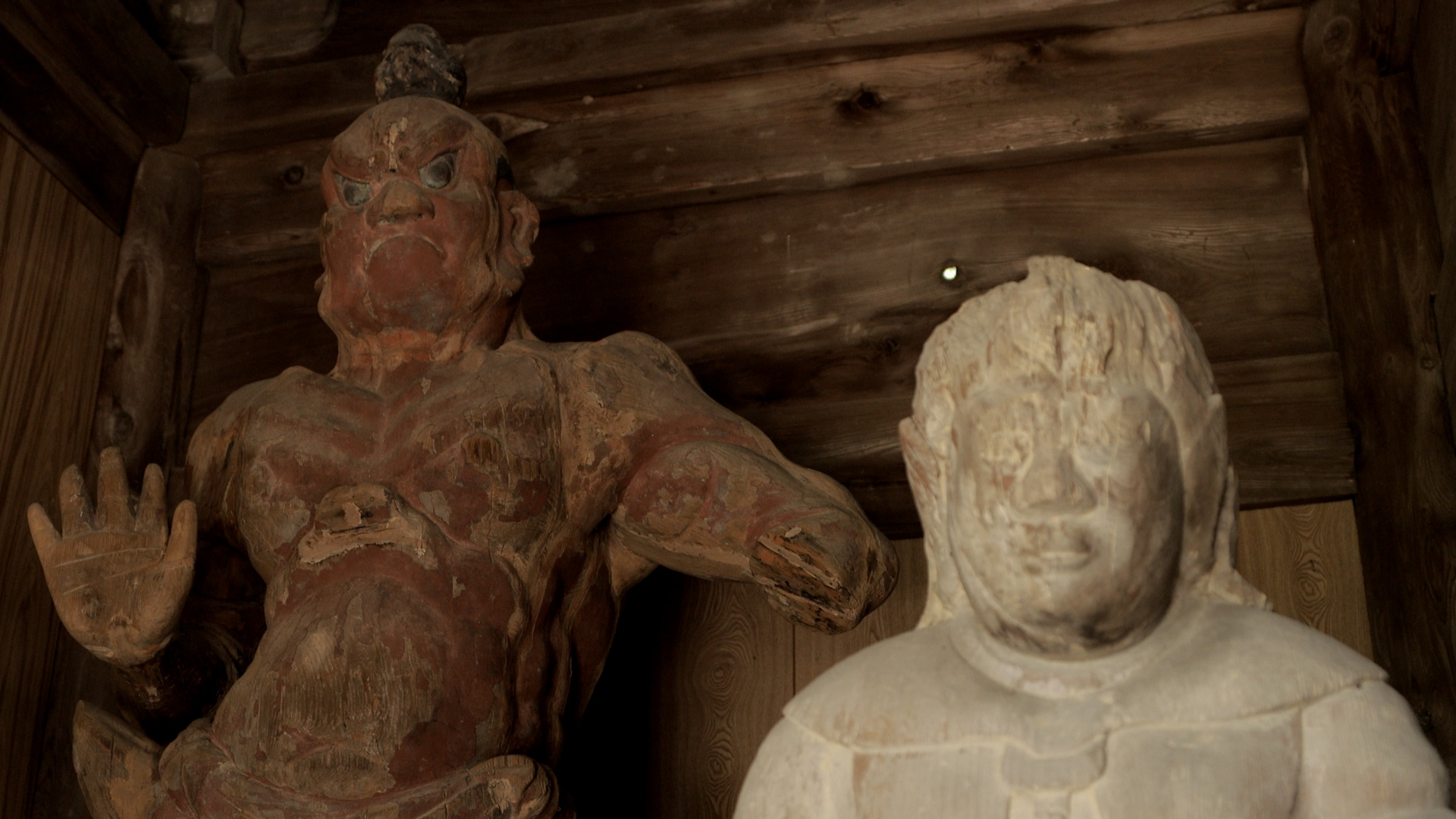 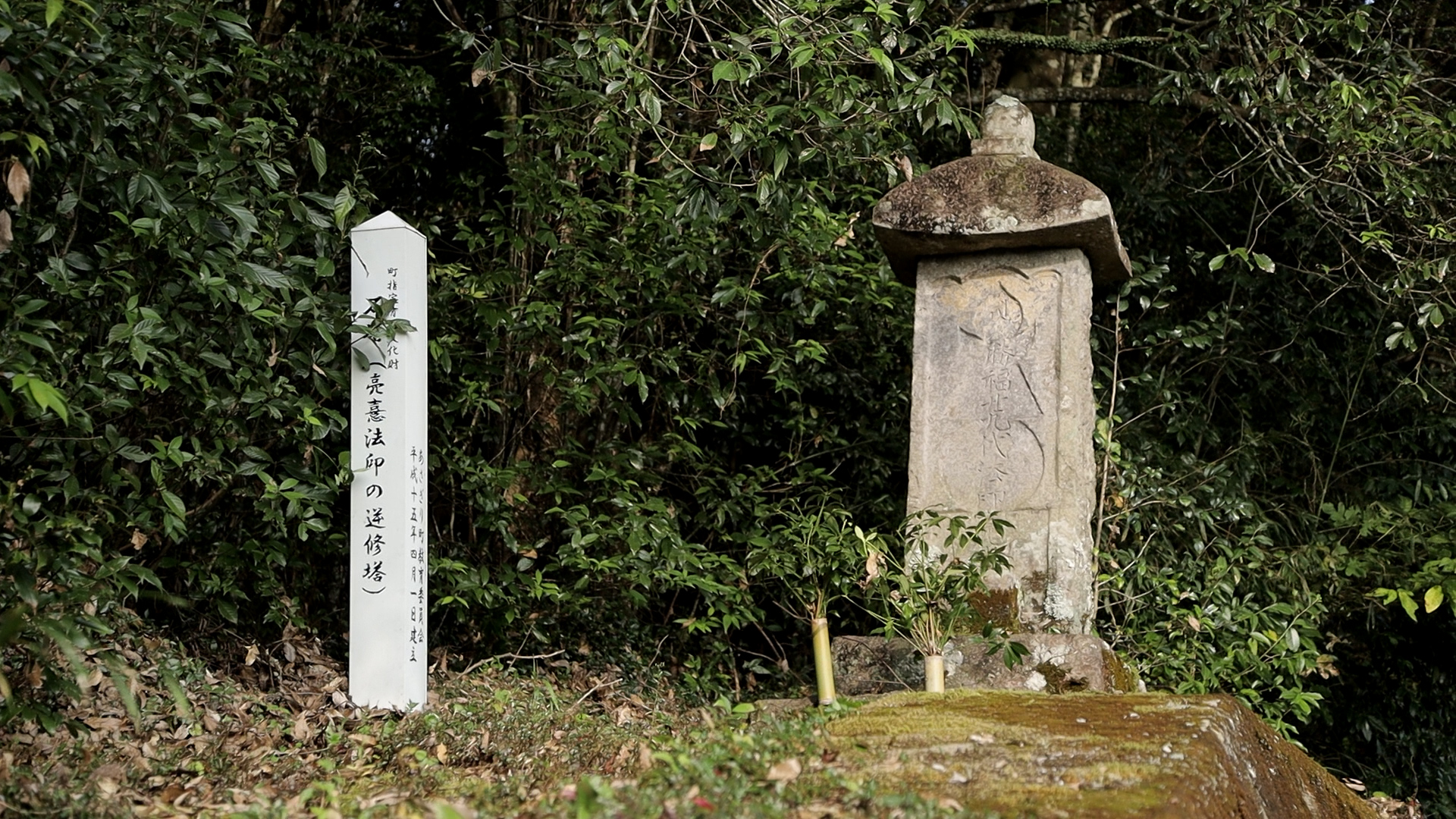 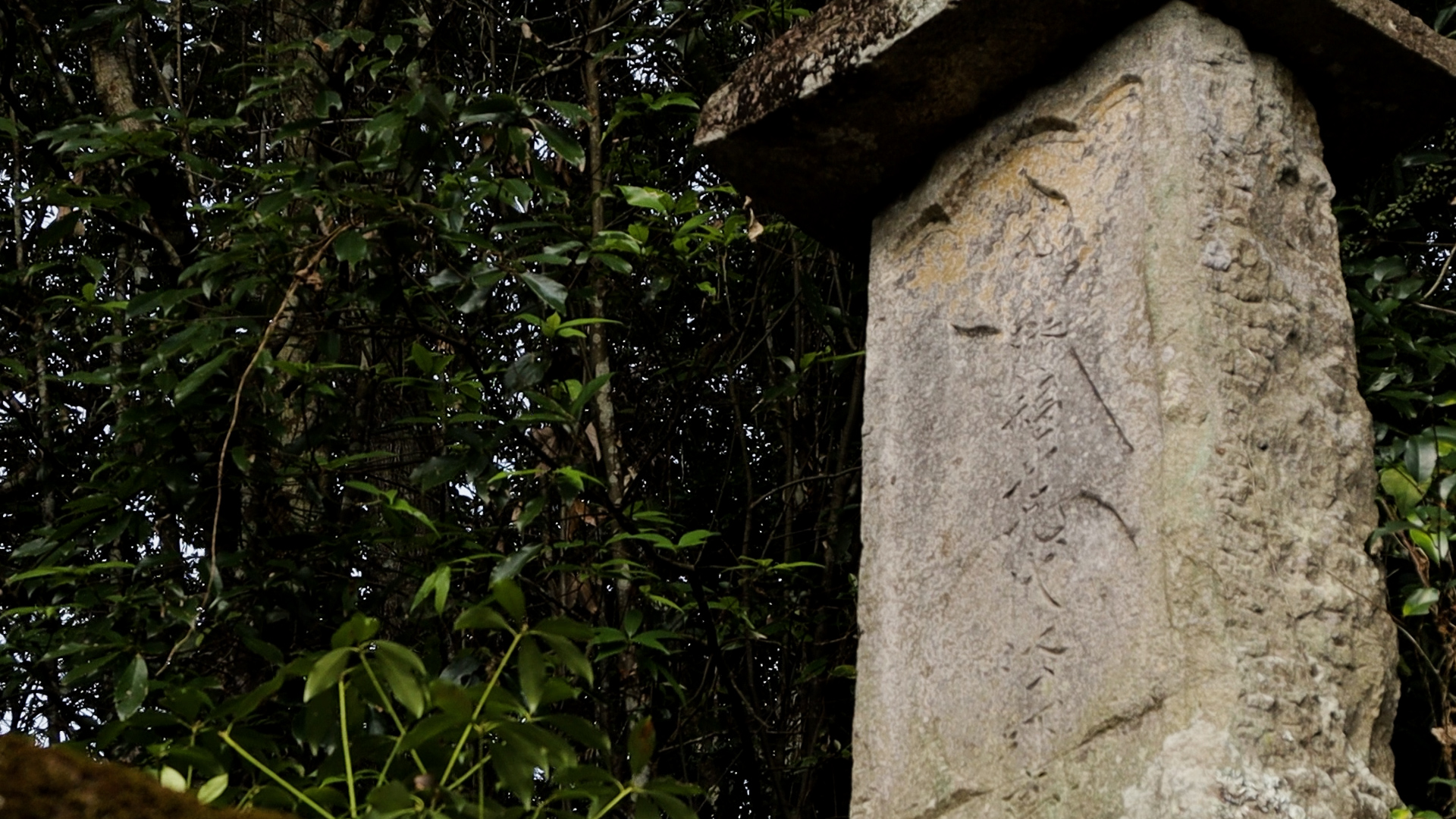 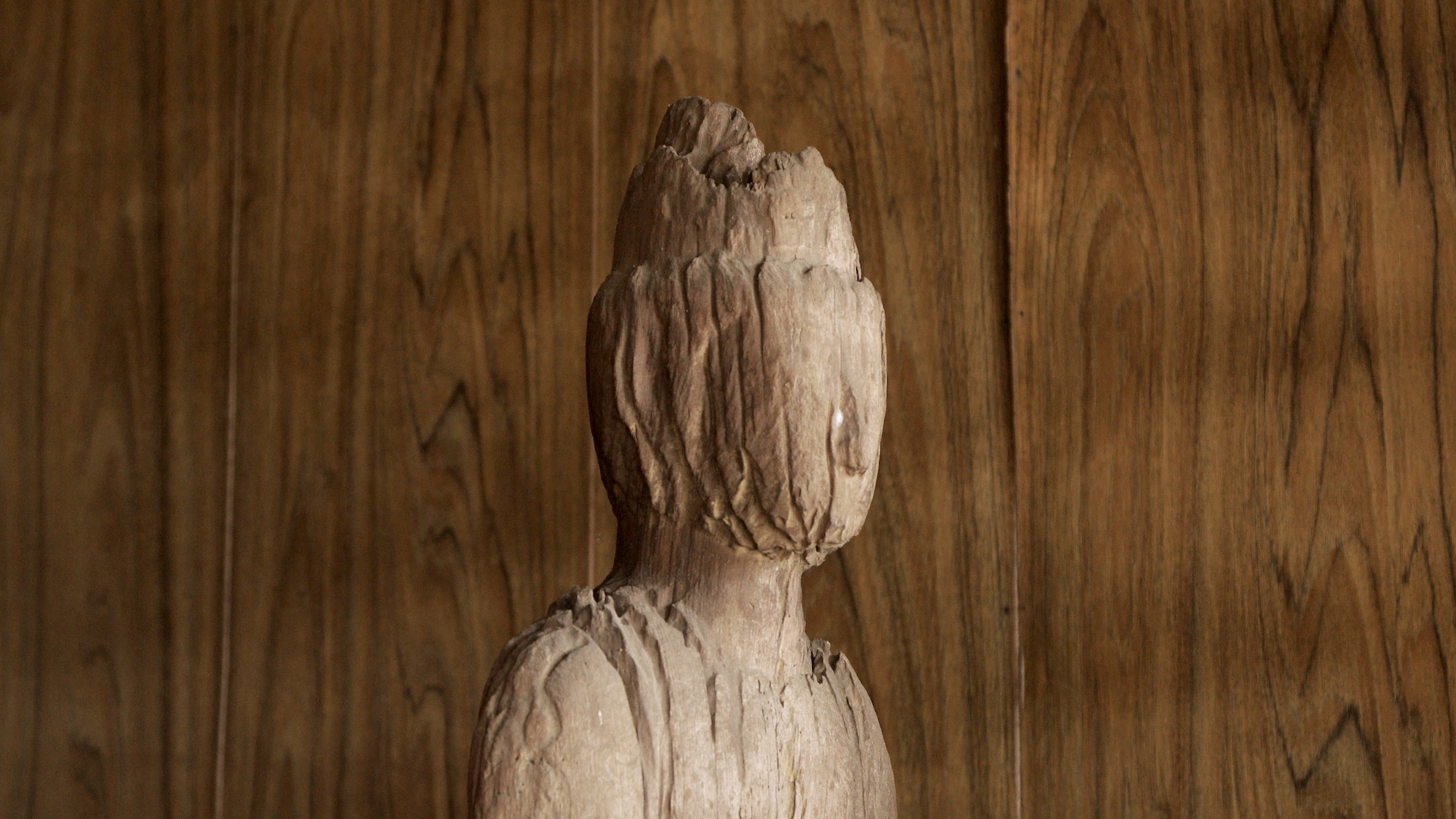 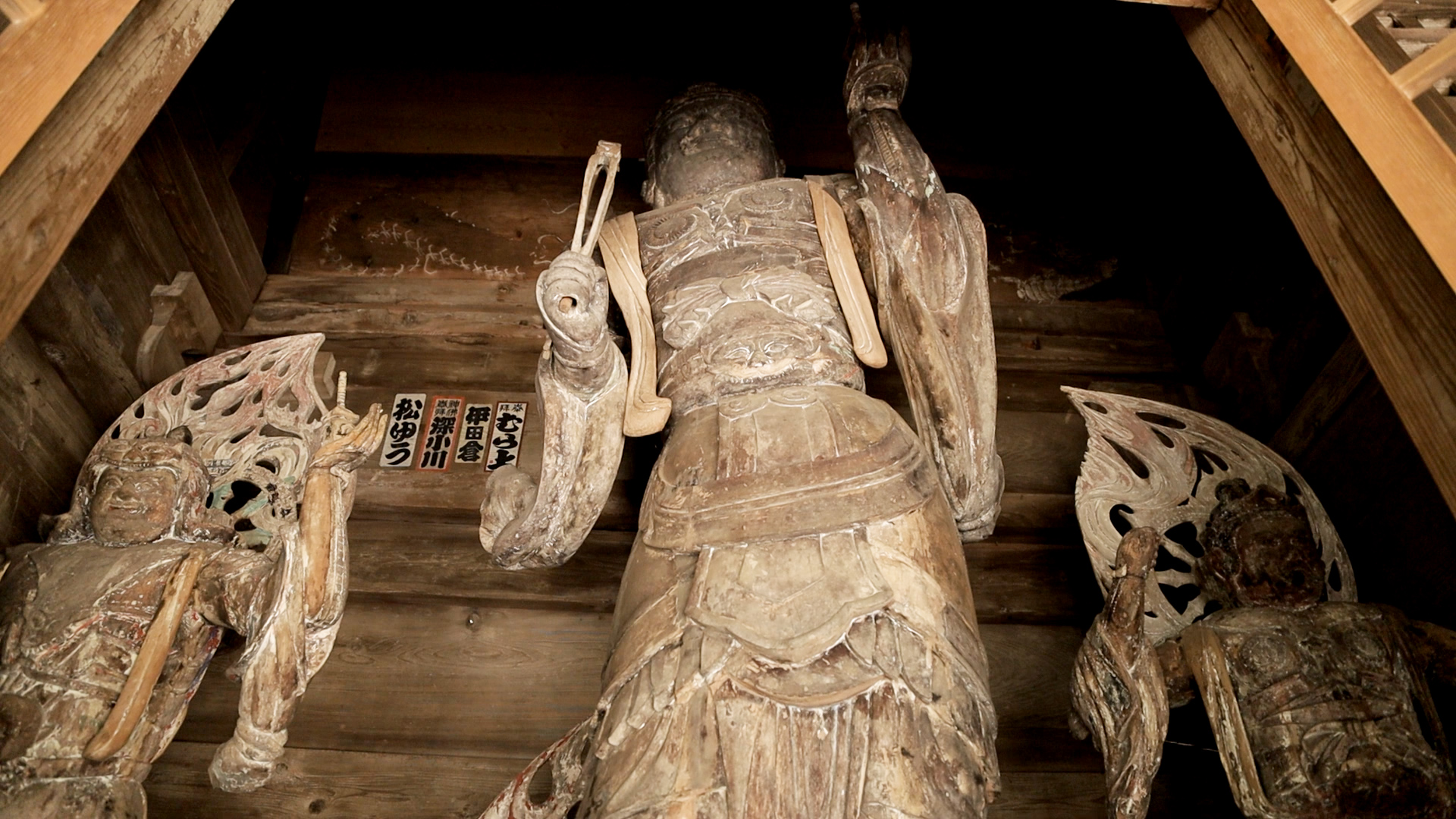 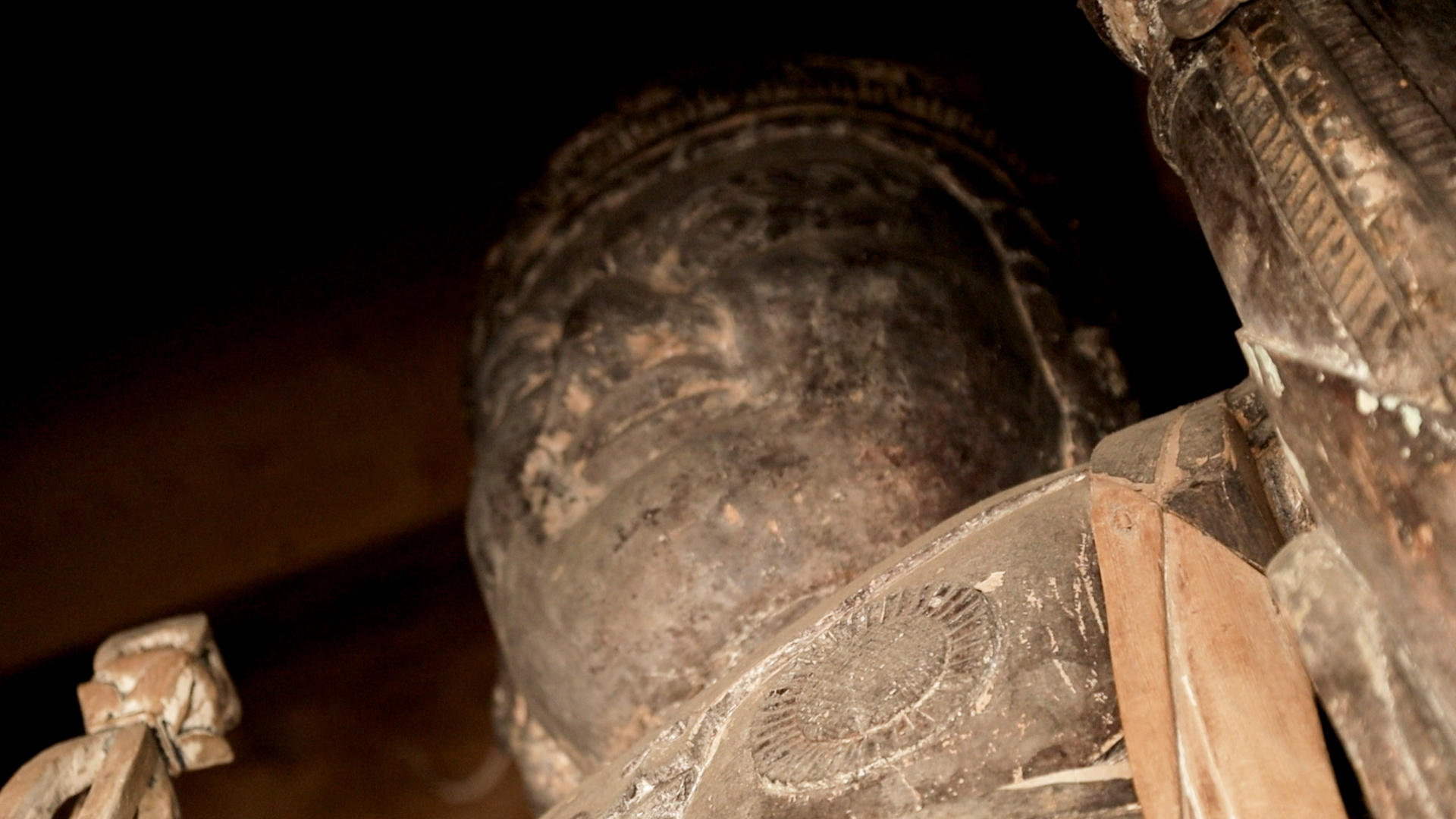 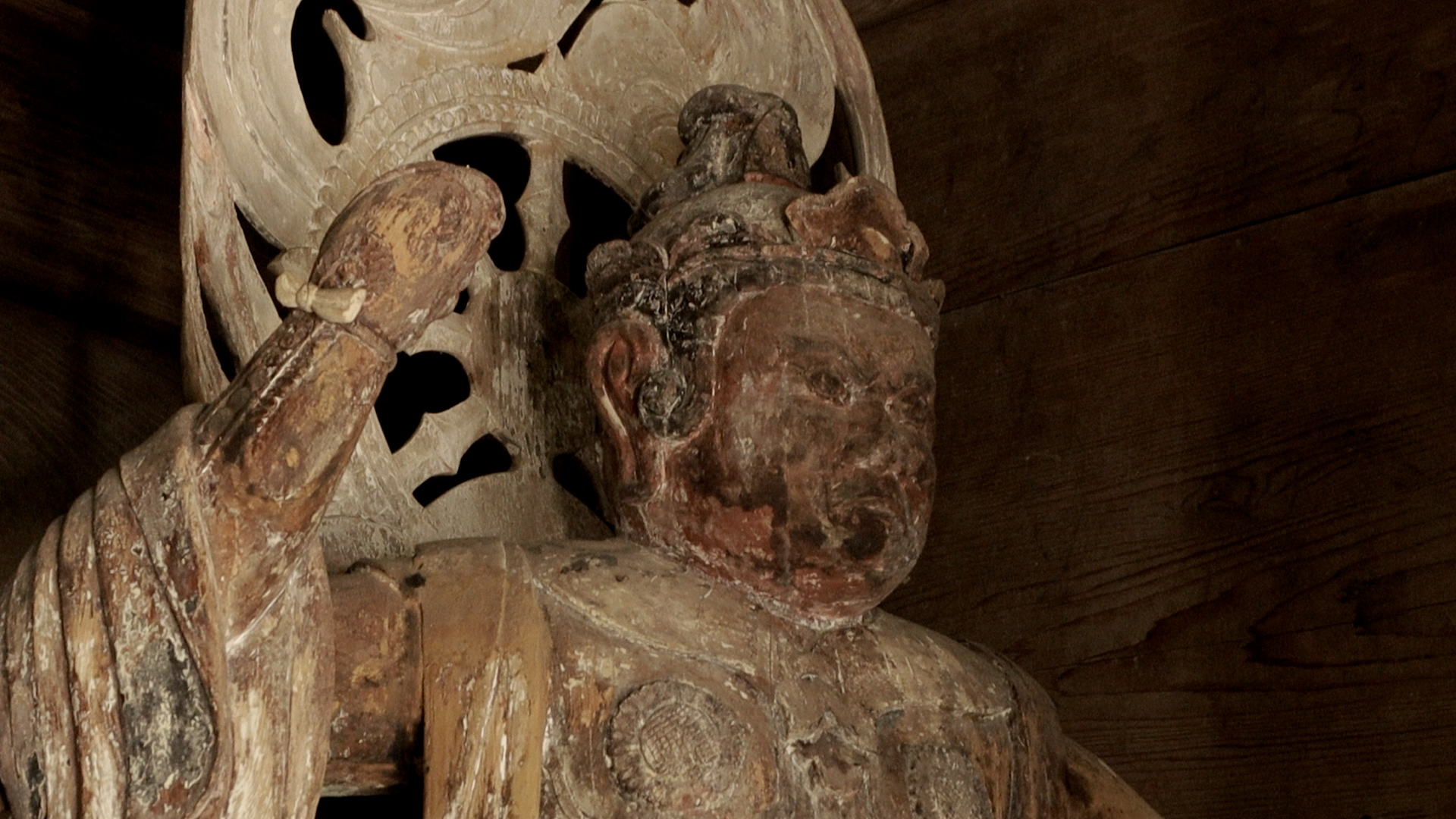 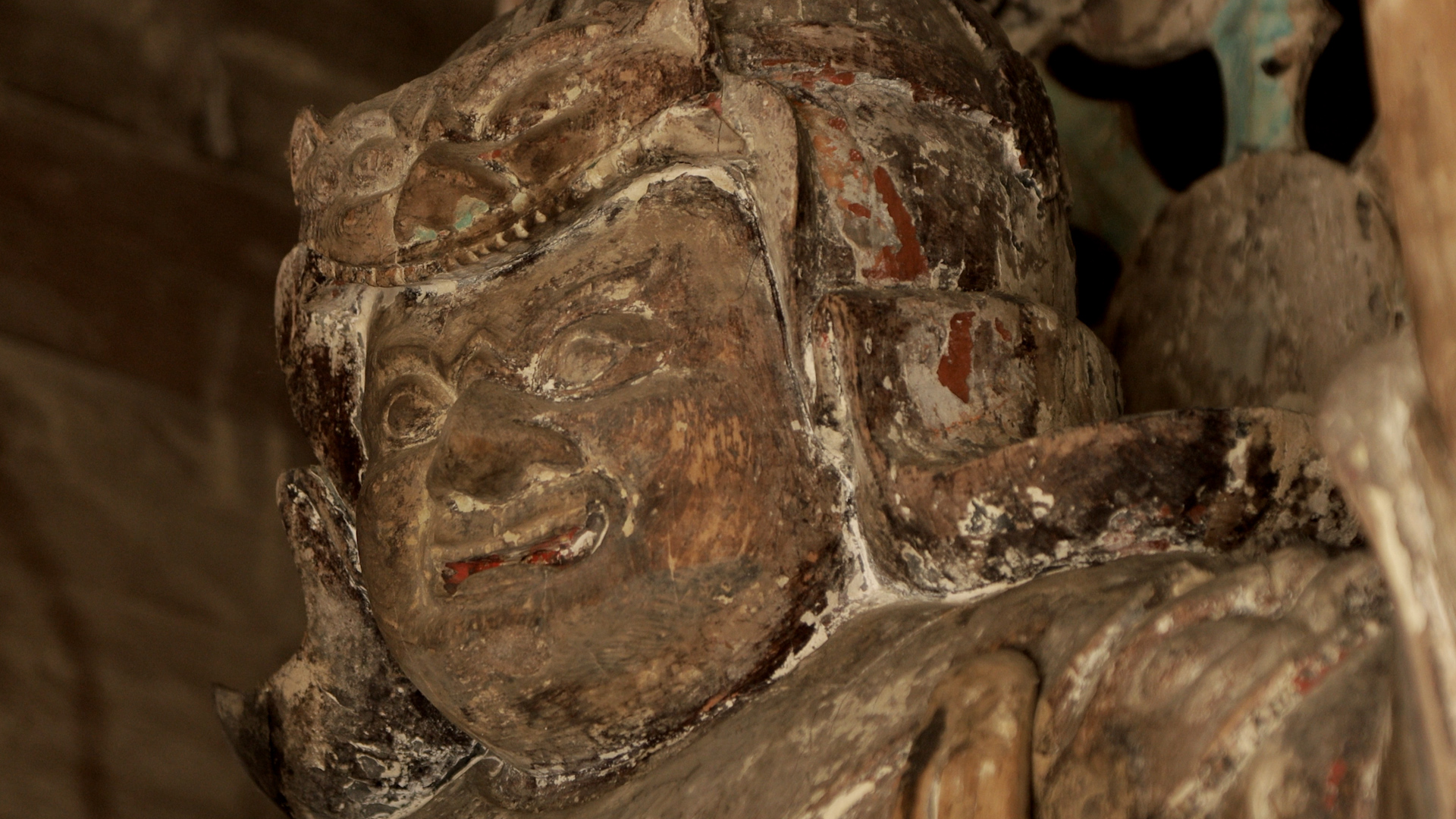 Aramo Bishamon Hall is located in the Fudakita/Aramo area in the town of Asagiri.

This Hall was originally the Gate of the Guardian Kings (niomon) of Shofukuji Temple, which were worshiped as the gods of victory and gave rise to the temple’s name, stemming from “be victorious (sho) and create luck (fuku)”, but it was abolished in 1870.

It was then rebuilt as Aramo Bishamon Hall and now houses eight Buddhist statues, including what is now the principal image: a wooden standing statue of Bishamonten.

It was said that Shofukuji Temple was built during the late Heian Period as a family temple for Shigemori (1138~1179), eldest son of Taira Kiyomori, but this was no more than a long-held theory.

However, records written in ink inside the belly of the wooden Bishamonten statue were discovered in 2004, revealing that this principal image dates back to 1156 and that the Temple was built as a family temple for the Sue clan, who ruled the area at the time.

The temple was later revered as the Sagara clan family temple.

Three statues, which have been preserved as relics of Shofukuji Temple and are enshrined within Aramo Bishamon Hall, have been designated National Important Cultural Properties.

At a height of 242.8 cms, the principal image, a wooden standing statue of Bishamonten, is one of the tallest statues of Bishamonten in Kumamoto Prefecture.

It is made of camphor wood using joined-blocks and has carved eyes.

It was enshrined in 1156 by the local feudal lord Fujiwara Ienaga to pray for longevity.

Above the head of the principal statue are four wall panels depicting centipedes, said to be the messengers of Bishamonten.

On either side of the principal statue are wooden Guardian King statues.

To the left is another wooden standing statue of Bishamonten, similar to the principal statue, this one standing 138.2 cm tall and made of cypress joined-blocks.

To the right is a wooden standing statue of a deva, 135.2 cm tall and also carved from a single piece of cypress wood.

Both statues are estimated to have been created in 1147.

There is also a Gate of the Guardian Kings (niomon), which is rare in the Kuma Region.

It boasts red-painted statues of Nio (the two Guardian Kings) standing approximately 190 cm tall on either side and expressing valiance and menace, and is affectionately known to locals as “Nio-san”.